Vietnam On A Plate: A Tour Of Vietnam's Best Regional Dishes

Travel for even a week in Vietnam and you’ll soon realise how few of its gastronomic specialities are well known outside the country. Every region lays claim to unique edible delights.

Culinary classics such as northern pho, Hue imperial banquet fare, and southern sizzling pancakes are just a tasty sample of what's on offer. In the north of Vietnam, the cuisine is closely aligned with China. Fewer spices are used than in southern and central Vietnam, but black pepper is very important. Here cooks use a superior grade of pepper that is mild but intensely aromatic, with a uniquely Vietnamese sweetness.

Equally vital are pungent herbs including basil, mint, coriander and spring onions. In the temperate centre of the country and the tropical south, more fruits and vegetables are available, and many different spices are utilised in local kitchens.

Southerners also use more sugar, even in savoury dishes, and dining is very much a hands-on experience. Many meals incorporate a mountainous plate of fresh herbs, which are wrapped with cooked meat and seafood in a crisp lettuce leaf, and then dipped in flavour-packed sauces.

A collection of typical Vietnamese foods 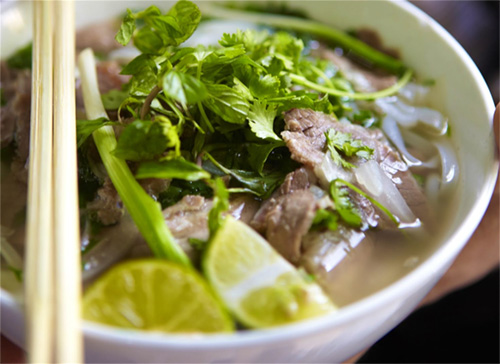 Pronounced like 'fur' (but drop the 'r'), pho is known simply as beef noodle soup by the locals. But a fragrant serving of pho is really Vietnam in a bowl. This world-renowned dish is available across the country, but it almost has cult status in Hanoi. A range of garnishes is always on hand to customise the dish to the diner’s personal taste. Lime juice, bean sprouts, or a dash of chilli or fish sauce can all be added, and in the south of Vietnam a tangle of fresh herbs is available for extra flavour and texture. The traditional beef variety is called pho bo, while chicken noodle soup is dubbed pho ga. In Hanoi, seek out the smoky decades-old Pho Tin for a tasty bowlful. 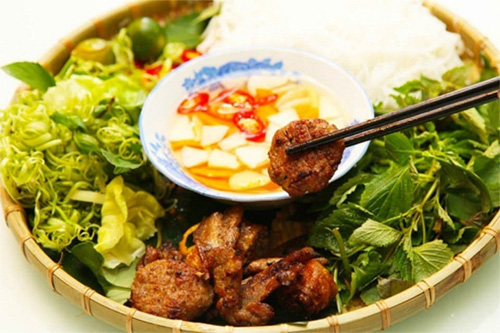 Bun cha comprises grilled pork meatballs served on a bed of cold bun (rice vermicelli), dressed with fragrant herbs and a sweetly mild dipping sauce. The meat is always cut from a piece of well-marbled pork, and marinated in sweet, hot, sour and salty flavours. In the street-food stalls of Hanoi, robust nem cua be (deep-fried crab spring rolls) are served as a hearty side dish. Grab an upstairs table at Bun Cha Nem Cua Be Dac Kim in Hanoi's Old Quarter to try it. 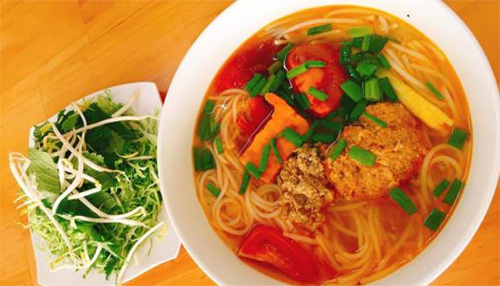 Thank the northern knack for turning humble ingredients into something sublime for this crustacean-flavoured soup. It’s made from rice-paddy crabs, packed with tomato chunks, green onions and bun (rice vermicelli), and topped with sautéed crab fat. Some cooks add bean curd and oc (large snails) in a dish called bun rieu cua oc. Green leaves, herbs and sliced banana-tree stem are all popular additions at the simple sidewalk stalls of Hanoi's Old Quarter. Our favourite vendor is at 40 P Hang Tre. 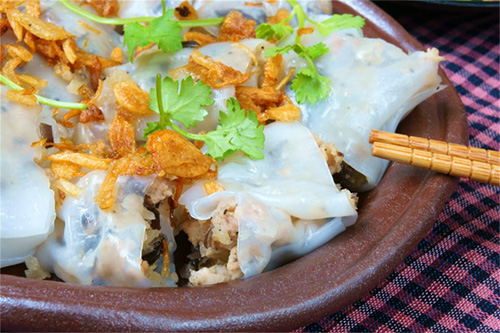 One of the tastiest legacies of Emperor Tu Duc’s reign in the imperial city of Hue in central Vietnam is bánh, steamed rice cakes served with a drizzle of fish sauce. Whether eaten plain, dotted with chopped mushrooms, or stuffed with dried shrimp, these dainty bites make the perfect light breakfast or between-meal snack. The heat-loving people of central Vietnam often add a dollop of chilli sauce to further enliven a shared plate of these delicate dishes. Hang Me Me in Hue has a huge menu of different varieties of bánh. 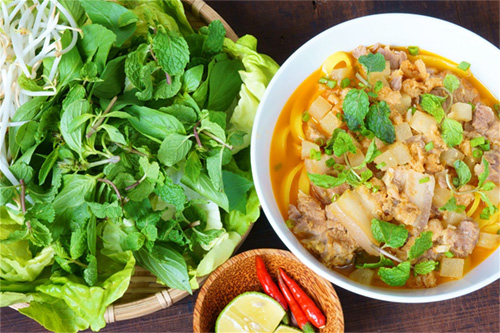 Thick and chewy turmeric-yellow noodles are topped with shrimp, pork, bean sprouts, herbs and chopped peanuts, and moistened with just a dash of rich broth to make mi quang. Named for its native province of Quang Nam in central Vietnam, the dish comes with rice crackers for crumbling and is finished in characteristically central Vietnamese style: with a dab of sweet-hot chilli jam. Excellent mi quang can be had on street-food tours with Funtastic Tours in the vibrant city of Danang. 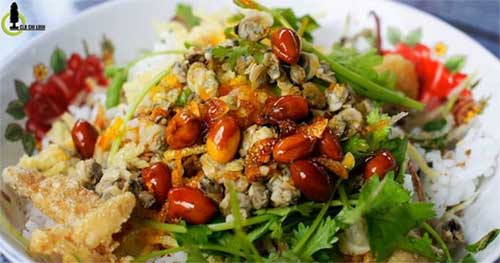 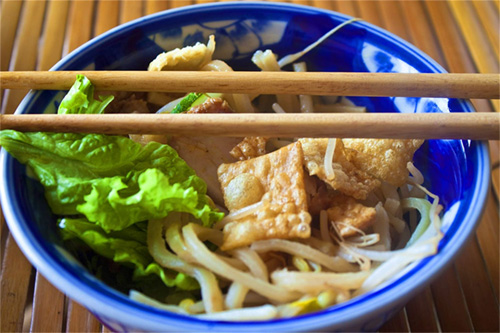 The legacy of centuries of international trade is evident in cao lau, the signature noodle dish of the central Vietnamese town of Hoi An. Thick soba-like Japanese-style noodles are seasoned with herbs, salad greens and bean sprouts, and served with slices of roast pork. Try this very local dish on a street-food walking tour with Eat Hoi An. 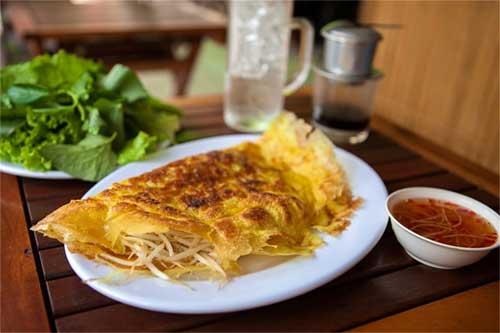 Bánh xèo is a large crepe filled with loads of tasty goodies. The Vietnamese make it with rice flour and coconut milk, and cram in meat, shellfish, fresh herbs, and crunchy vegetables. Dipping sauces add an extra tang. Bánh xèo is often referred to in English as a Vietnamese 'pancake'. In reality, this is an unsatisfactory translation, as bánh xèo is far more flavoursome and interesting. Try this classic dish at Banh Xeo 46A in Ho Chi Minh City. 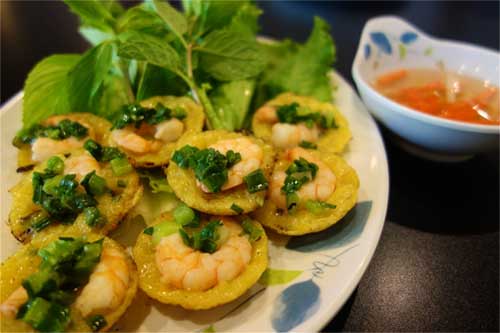 These small sweet-and-savoury prawn pancakes are made from ground rice and coconut milk batter that’s cooked in special half-spherical moulds, resulting in a crispy crust enclosing a soft centre. A speciality of Ba Ria-Vung Tau province, bánh khot are eaten rolled with herbs in a lettuce leaf. 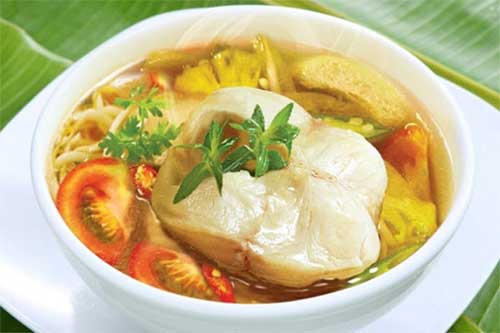 This beautiful, tangy tamarind-flavoured soup embodies the Mekong Delta’s abundance: from its waterways come fish; from its fruit plantations, pineapple; and from its fertile soil, tomato and spongy bac ha (taro stem). The region’s rice paddies contribute the cumin-like herb rau rom. Accompanied by rice, canh chua is an unpretentious, appetising meal in a bowl. 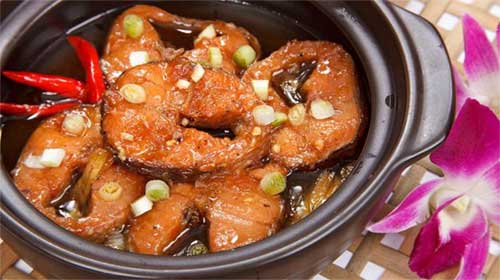 Claypot cookery is a very southern and very satisfying technique for making hearty meat and vegetable stews. Claypots are usually small, often unglazed, with a lid, and look little different from a flowerpot with a lid. They were originally used by farmers and fishermen who had little to cook, few pots to cook in, and little fuel for the fire.

By Brett Atkinson from LonelyPlanet.Com